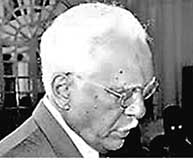 The ‘RKW Goonesekere Memorial Programme on Law and Justice’ is an event celebrating the life and work of late Mr. RKW Goonesekere and the only programme of its caliber, hosted by the University of Colombo, Sri Lanka. The programme seeks to commemorate his unwavering commitment to justice and values of professional integrity. The programme is funded by an Endowment established at the University of Colombo by family members of Mr RKW Goonesekere. The objectives of the Endowment are promotion of justice through law, strengthening of a critical understanding of professional ethics and strengthening of the linkages between academia and the legal profession.

-Hand written note by Mr. RKW Goonersekere, for an opening address in a case before the Supreme Court.

The above is an extract that reflects the philosophy of late Mr. RKW Goonesekere, whose thinking, inspired many generations who came after him. Admired by many for numerous contributions to the Sri Lankan community, Mr. Goonesekere’s work is multi-faceted, varying from contributions to the legal profession, legal education, public life and the development of the law in Sri Lanka.

Born on 8th May 1928, Mr. Goonesekere was the first graduate of the Department of Law of the (then) University of Ceylon. Mr. Goonesekere was a legal scholar and a lawyer of eminence. He served in the capacity of a Lecturer in Law and a Senior Lecturer in Law at the University of Ceylon (Peradeniya) and was later appointed as the Chancellor of the same university (2002-2007). He was one time Principal of the Sri Lanka Law College (1966-1974) and was an Associate Professor of Law at Ahamadu Bello University, Nigeria (1978-1982). In his capacity as a scholar and a teacher, he influenced the lives of leading legal academics and practitioners of the Sri LankanBar. He is idolized by his students as an inspiring, intellectually stimulating teacher and a scholar and recognized for carrying his knowledge and wisdom with humility. Among students, he was known to be a teacher who had an easy grasp of complicated issues of the law “which enabled him to explain them with a rare clarity.” Respectfully referred to as ‘magister magistrorum’ or teacher of teachers, he was the model for the many students who themselves became law professors and leading practitioners later.

Mr. Goonesekere was a versatile writer on a wide range of subjects in public and private law, such as Administrative Law, Criminal Law, Constitutional Law, Human Rights, Family Law and Land Law. His published writing, dealt with current issues of law and justice, such as corruption, electoral reforms, capital punishment, monolingual education and the impact of the 18th Amendment to the Constitution of Sri Lanka.‘FR Casebook I’, ‘FR Casebook II’ and ‘Selected Laws on State Lands’ are a few out of his many publications, which have been printed and reprinted based on popular demand, and continue to be used by academics and practicing lawyers. Less well-known is a publication on the Sri Lanka law on Bribery and Corruption.

A lawyer of eminence, Mr. Goonesekere was a distinguished member of the Bar. He was known for setting an example from his demeanor and conduct. His contribution and influence to the profession as Counsel is seen in landmark cases such as “Eppawela case” (2000), “Editors’ Guild case” (2000),“SLBC case” (1996), “Ratawesi Peramuna case” (1994) and “Janaghosha case” (1993) which changed the discourse on justice in the country. Moreover, he appeared as amicus curiae at the invitation of the Supreme Court in the groundbreaking case of“Abeysunderea v. Abeysundera” (1998). He is admired for his work as a human rights lawyer who actively strived to use litigation to deliver justice, at a time when the country was going through turmoil. The last case he argued in the Supreme Court was the “Singarasa Case” (2006) on torture in detention. In the case he argued on the application of international law in the domestic legal system of Sri Lanka. He submitted to court, with respect, that“A treaty solemnly entered into by the State, in the exercise of the executive power and in terms of international law, is not subject to judicial review.”

Dr. A.R.B. Amarasinghe, Late Justice of the Supreme Court in admiration of Mr. Goonesekere’s personality acknowledged that “he had a keen faculty of perception and a delicate sense of what was right and wrong, fitting and proper at the time….he did not make the mistake of thinking that he was to go into the profession to win for his clients by whatever means he could. He resolved to win by justice.” He is fondly remembered as a Counsel who appeared pro bono for completely unknown persons seeking legal aid, arguing “causes rather than cases.”

Tributes to Mr. RKW Goonesekerehave recognized him as“a man of great generousity of spirit, of sharp intellectual and legal insight and above all, an unflinching commitment to the values of integrity, justice and human rights.”His life reflects a vision that is inspiring, setting standards that we must strive to continue.

It is hoped that the ‘RKW Goonesekere Memorial Programme on Law and Justice’ that is being inaugurated on 29th July 2016 will inspire law students selected for this Programme to internalize in their own professional lives the abiding values on law and justice that guided Mr. Goonesekere as a legal academic and a practicing lawyer.

Webinar on Sovereignty of the People and Dilemma of the Constitution

Call for Applications – Master of Human Rights and Democratisation

CALL FOR VOLUNTEERS – The Legal Aid Unit, Faculty of Law